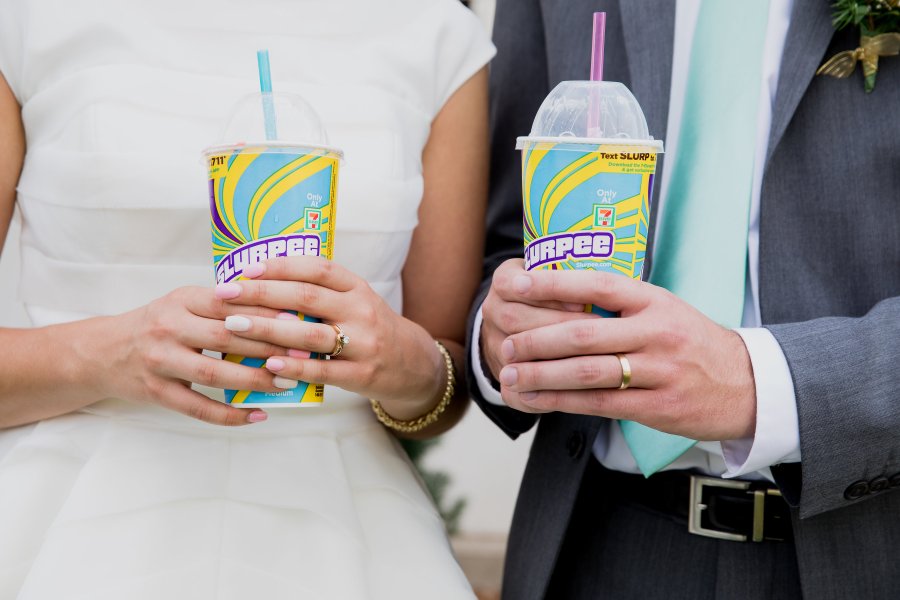 I was at a wedding reception for a remarkable friend I had made while I was a missionary in North Carolina. The bride was one of the Sisters I taught with, so the reception naturally had a few other familiar faces from that time. As I was catching up with a familiar face, Evan and Camilla came up in the conversation. Camilla had served with us, and when you serve a mission, it is as if you become one big family, and weddings become great reunions! Sitting at the table, we talked about how Camilla and her now husband, Evan,  seemed to have something very special. My friend shared how wonderful their wedding had been, and how precious the two of them were. These two didn’t even skip a beat, as they included slurpees in their wedding on 7-11! Love stories are meant to be told, and Evan and Camilla–Best Loves–are so gracious in sharing their story with all of us. I know that I have already learned a few things from their words. So without further adieu, allow me to introduce you to two very remarkable best loves! Take it away Camilla!

It’s hard to start writing this because I don’t know where to start!  There are so many little things that led up to where we are now.  It was September 2012 in the cafeteria of BYU-Hawaii.  My friend and I were fueling up before the big welcome dance!  I am a die-hard dance fan and was not about to miss my first college dance. My friend was not as excited as I was but was willing to give it a try.  She got up to refill her plate and while doing so met someone and ditched me!  I was shocked and scared.  I had two choices: sit alone and look like a weirdo OR follow her and sit with the new bunch of boys.  I took a deep breath and walked over and sat in the only available chair.  The boys were nice enough and we made plans to meet at the dance (which made me more excited than the fact that I just met 5 new boys).  One of those 5 boys was Evan, whom I sat next to, but I do not have any memory of that.  I don’t remember hanging out with Evan til about a week after we had been hanging out as a group.  From then it just kinda dwindled until the two of us were they only ones wanting to hang out together.  I had never wanted to kiss a boy so badly (I’d only ever been in a ‘serious’ relationship once before this moment) and I was constantly calling my BFF’s back home to vent!  They kept telling me to make the first move and there were about ten times I almost did!  Then, when it finally happened it was the most perfect moment I had ever been caught up in!  I had fallen in love… deeply, deeply in love.  We had not yet served missions and this made my heart panic.  I had no intentions of liking him so much that even the thought of separating brought me to tears.  But I wanted him to serve as badly as I wanted to serve so we both committed to following those promptings and would just see how it all worked out.  Ok, slight side note.  When we had just started dating I brought this separation up with Evan and to this day I can still remember every detail about our interaction.  He looked at me, took my hands in his, and said “Don’t worry! It will all work out.  Trust me on this.”  I again fell deeply in love with him (but we never actually used the “L” word until after our almost 3 year separation).  It was rough three years apart.  I am the most unsure, impatient human on this planet!  We committed to not wait for each other and though in the end we basically did.  I went on dates with other guys while we were apart but I could never see myself ever dating any of them seriously.  Evan was just… so perfect that it scared me.  I never had intentions of pursuing a relationship bound for marriage but that all began to change the longer I was around him.  And the more we wrote and emailed I felt more and more nervous about everything! I wanted to be his perfect girl and saw all my faults as massive canyons between us.  I fought hard to have him reconsider his affection for me and he fought harder to show me I was everything he was looking for and more.  The mission was a bumpy road for us, but I lived for every international envelope I received every two weeks.

Our first skype after our missions was an overwhelmingly, joyous experience.  From that moment we were inseparable though we lived over 4000 miles apart.  Skyping, texting, and even keeping up with the letter writing we rekindled everything and more.  Basically from that moment it all was a blur.  I went back to school with him, we started talking about our future, met each other’s families, and went ring shopping!  He is the biggest perfectionist I have met when it comes to romantic gestures.  We had been ring shopping for a couple months and I was becoming very very impatient and frustrated!! But the day he proposed was more than I could have ever dreamed of.  Definitely worth the wait!  Being sealed to the person who is greater than you could have dreamed of was, and always will be, the most sacred and joyous day of my life.  There is no substitute for an eternal marriage.  There also is no substitute for my hubby!  I mean, come on!, he cooks dinner a majority of the nights, does the laundry, makes the bed, takes out the trash, makes and packs my meal prep meals, and on and on!!!  I definitely married up! 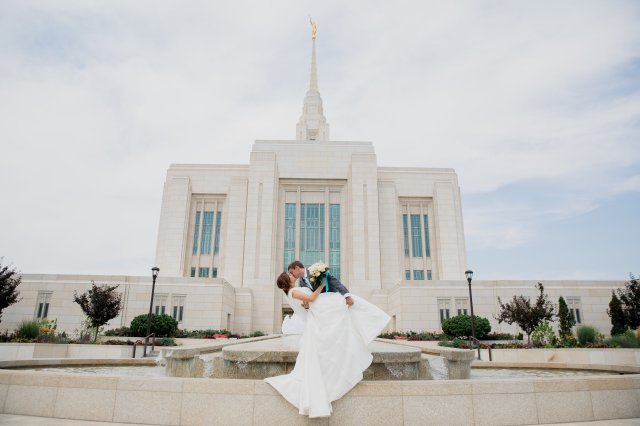 Being an extreme introvert, going to a college where I knew nobody was a challenge. I tried to quickly make friends with those that lived on the floor of my dormitory, who, while interested in friendship, were much more interested in girls. This led me to following them to dinner before a school dance, where they hoped to meet nice women folk to court. At dinner one of our friends mistook a girl for someone else, but invited her to sit with us at dinner. She, being a vivacious extrovert graciously accepted, and left her friend to come sit with us. Her friend, who would later become my wife, joined us not wanting to eat alone. Fortunately for me, the only seat left at the table was next to me. We then spent most of the evening as a group of friends, most of the weekend together, and before long our friend group slowly dissolved until us two remained. Still being good friends ourselves we spent a large portion of our time together, which led to everyone assuming and accusing us of having feelings for one another. The problem was, is I was already starting to have them. Again, due to my shy nature, I did not act on my feelings for some time, and when I did decide to act on them, I wanted everything to be perfect, so I ended up waiting even more. Eventually feelings were admitted, and a sunset beach kiss later we finally were together. We had a long period of physical separation, in which I’m sure she realized how much better she could do than me, but I was persistent, probably border line obsessive. For me distance really did make the heart grow fonder, and the years spent apart made me realize what an integral part of my life she had become. When she told me she had decided to come back to the same school as me, I knew we would get married, and even though she’ll say it took too long, everything I did, I thought would help us get to that point. We dated, met the other’s family, and at thanksgiving I was talking to her father about marriage. Once that was set, all I needed was the ring. I had flashbacks to when I had first started being friends with her and wanted to tell when we went ring shopping; it had to be perfect. Again this slowed the process somewhat, and by the end of it, I probably could have proposed with a ring pop and she would have said yes. Engagement soon followed, and wedding planning thereafter. It was probably the point in our relationship when time flew by the fastest, and before I knew it we were about to be married. And in all the emotions and franticness of not only the planning but of all the relationship, I was never worried or concerned about what I was doing. I had never been more confident in my life about a decision than marrying her. The wedding day came, and I wasn’t nervous or scared, I was ready and excited to begin the rest of my life, knowing I had made the best possible decision I could ever make.

Remember, the greatest love stories, are the real ones. -love, Tayler

One thought on “Evan and Camilla: A Love True and Deep”

“Being deeply loved by someone gives you strength, while loving someone deeply gives you courage.” – Lao Tzu

Best of My Best Love: